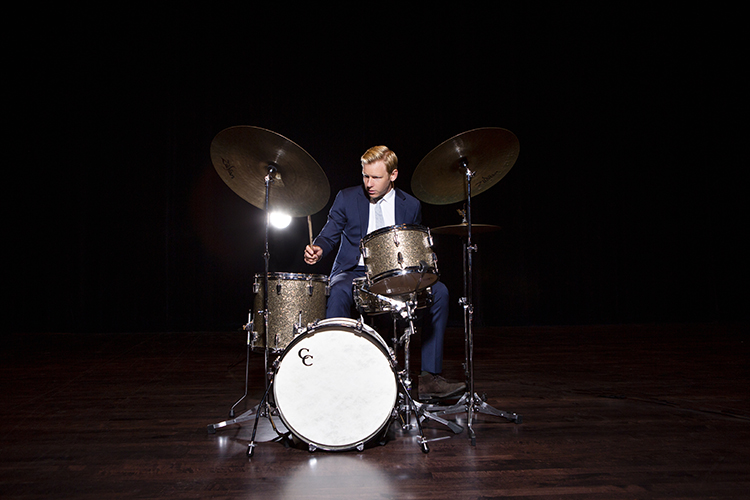 Ted Poor, The Blues and Otherwise

University of Washington student Elias Hampton signed up for a special section of MUSAP 389/589 at the School of Music this quarter not really knowing what to expect, but drawn by the fact that it would give him an extra opportunity to study closely with drummer Ted Poor.

“Since I got to the UW to study jazz two years ago, my musical education has been vastly enriched by Ted Poor,” says Hampton, a guitarist and undergraduate in the UW’s Jazz Studies Program. “I have had the pleasure of taking a class with him both years thus far, and have learned a lot from his passionate and focused approach.” Last quarter, Hampton was part of a small musical group, led by Poor, devoted to learning and studying the music of the 20th century free jazz icon Sun Ra. Poor, who joined the Jazz Studies faculty in 2013, also is involved in coaching one or more of the small jazz groups that convene to study and perform each quarter at the School of Music, giving most students in the program an opportunity to work closely with him at various points in their degree studies.

The class Poor is leading this quarter promises students a laboratory experience unlike no other at the University. They’ll be gaining insider insights into the life cycle of a musical recording project covering every step involved in the process, from incubation of song ideas through the final mix.

Students enrolled in the course—all active in the UW Jazz Studies program—will be present for the entirety of a weeklong recording project getting underway later this month by Poor, pianist Kris Davis, and bassist/keyboardist Tyler Chester, working with LA-based sound engineer David Boucher.  They’ll be required to attend all rehearsals, recording sessions and a culminating performance, “The Blues and Otherwise,” October 19 at an intimate Capitol Hill venue, The Church. The concert, co-sponsored by the School of Music, is part of Seattle’s 2018 Earshot Jazz Festival.

For Poor, the recording class represents a convergence of his life as a teacher and life as a professional musician. An assistant professor of jazz at the University, Poor maintains a thriving performance career outside of the UW, performing as a bandleader and collaborator with leading figures in New York’s experimental and improvised jazz scenes. He also performs as part of the house band for mandolinist Chris Thile’s NPR radio show “Live from Here” (formerly “A Prairie Home Companion”) and as a frequent collaborator and performer with indie pop artist Andrew Bird.

Poor’s solo and collaborative work brought him into the musical orbits of his bandmates on this project—Davis, whom he deems “a remarkable pianist doing great things in the New York avant-garde jazz scene,” and Chester, an L.A.-based bassist/keyboardist who plays with Poor in Bird’s band as well as working with artists such as Joan Baez, Jackson Browne, Blake Mills, and Sara Watkins. Boucher also claims impressive credentials: “David is a first-call wizard in the L.A. recording/mixing industry, and we have worked together on two Andrew Bird records and a Mitchell Froom production,” Poor says. “He records and mixes the soundtracks to Disney's blockbusters and has worked with the likes of Bruce Springsteen, Bonnie Raitt, and Randy Newman.”

Bringing together seasoned professionals from the music industry and aspiring jazz musicians is nothing new in the UW Jazz Studies program, which has long served as a laboratory for musical exploration by visiting jazz musicians, performance faculty, and talented students. But while students in the program have in the past gained experience performing with renowned guest artists, they have never before had the opportunity to witness, up close and in person, their teachers’ complete creative process.

“We'll record 12 to 14 of my songs, many of them blues variations (hence the title),” Poor says. “The students in the class will attend all of the recording sessions and the Earshot performance. They'll have the opportunity to talk with the musicians and with David Boucher about the engineering process, and witness our workflow, discussion, and debate as we head towards the final product. I'll meet with the students in the weeks prior to the session to share my preparations and play through the material with them. We'll also meet in the weeks after the session to debrief, listen to the mixes, and talk about the next steps.”

At the end of the entire process, students will have gained a realistic sense of the work, organization, and practice that goes into preparing for a live performance and recording session. And though they aren’t actively performing on this outing, they will have seen first-hand how professional musicians operate in real-time, and all that goes into completing a creative project that might otherwise seem to have come together effortlessly.

“I don't anticipate any real assignments –though once we’re in the studio, my challenge to the students will be for them to match our intensity and focus every step of the way. I will also give them some exercises and projects to help them work towards organizing their own recording,” Poor says. “In the future, I hope to give the students some studio time to record themselves.” No doubt the aspiring musicians will be doing just that, with plenty of food for thought, inspiration, and wise words from the pros to guide them.

“Ted is an endless well of creativity and curiosity,” Hampton says in agreement with that sentiment. “Working with him, there is a feeling that we are all discovering something new together at each moment.”

After graduating from the Eastman School of Music in 2003, drummer Ted Poor moved to New York City, where he has made a deep impression on the jazz and improvised music scene.  Modern Drummer describes his playing as “adventurous, truly dynamic, and forward-thinking.” Jazz Review writes, “Ted has an uncanny ability to shape the music and a refreshingly unique, organic approach to playing the drums.” This unique approach has caught the ears of many of jazz’s most established musicians and quickly placed him amongst those drummers most in demand. Ted has toured the world over and is a regular member of many bands, including those of Grammy award winning trumpeter Cuong Vu, guitarist Ben Monder, Bad Touch, and the Respect Sextet. Read more about Ted Poor.